Blowfly aka Clarence Reid Returns to Austin Saturday Night at the Scoot Inn!

Favorite club, and one of my favorite legendary artists. Alongside one of Austin's finest, D-Madness, and the lyrical giants Subkulture Patriots. This will be the most fun you will have at a show for a long time. Don't miss this. 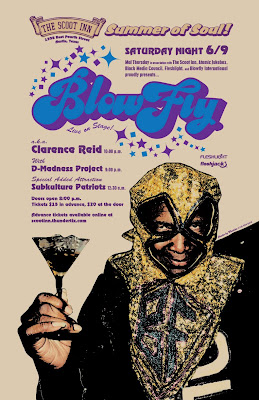 I've booked Blowfly a few times, most notably at SXSW in I think 2006 at The Backroom with Devin the Dude, Jean Grae, The Chicharones, and more. It was quite a night and blew more than a few minds. Dude is raw. He IS the original rapper. His song "Rap Dirty" was hands down the first rap song, made before the concept of hip-hop was even a thing.

Blowfly is the alter-ego of Clarence Reid, one of the great American songwriters. Google him, he's a legend and he's coming to Austin for one show, and one show only. And its partially sponsored by Fleshlight, so come down and see if they are doing any give-a-ways. A man can dream.

Peep some videos of the man Clarence Reid aka Blowfly after the jump, and if you ever see Devin the Dude ask him whatever happened to the two songs he recorded with Blowfly some years ago that have yet to see the light of day!

Posted by Pushermania at 8:24 PM