I'd like to say it isn't so, as I hate to see one of my best friends in this city leave, but alas, greener pastures call. Yeah man, Bavu Blakes and his wife Tifani are moving to Los Angeles. 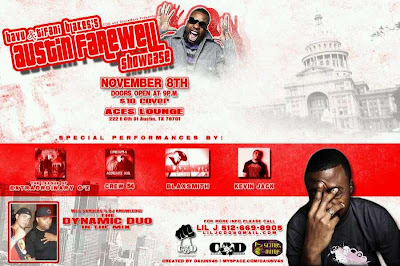 The farewell party happens this Sunday night, Nov. 8th at Ace's Lounge. There's a grown folks celebration from 6 - 10 p.m. and a young bucks party from 10 p.m. - 2 a.m. Some of Austin's finest hip-hop and soul talent will be performing and of course you gone see the man Bavu Blakes wreck one last time before he leaves us.

I have really mixed feelings about this whole thing. I've known Bavu since I guess 1995. I had moved to Austin and was doing this thing called The Hip Hop Coffee Shop at Ruta Maya, when it was on 4th Street. We would have people sign up to get on the open mic, and he signed up and I said his name wrong so he rapped in my face for a couple minutes about how wack it was that I said his name wrong. I could tell that dude could rap, but I was kind of just looking at him like, "Who the fuck is this dude and why?"

Then we became great friends. Dude is a serious talent, one of the best MC's I know and definitely in my opinion, the best live performer in hip-hop. Don't take those words lightly, cuz he is. Dude kills it every time and puts a lot of thought into his shows. Always respected that about him. he is an all around hustler and my dude fo life, but alas, I actually think that him moving to LA is a good thing for his musical career.

That's not to say you can't make it in Austin, but dude has been putting it down for so long, I think it's time for a change. And it's time to let them folks out on the West Coast see how he does it. My only hope is that the Too Selfish album comes out next year sometime and that he comes to SXSW AT LEAST!

Gonna miss the man, but yeah, I don't blame him.

If you love hip-hop, you should be at Ace's this Sunday night to send off our cities brightest musical talent.

6 - 10p
performances by Gidon, Blacklisted Individuals, D-Kutz
and me (9p)

10p - 2a
performances by League of Extraordinary G'z, Crew 54, Blaxsmith, Kevin Jack
and me and NickNack (12a)

...and last but not least, Tony-C is singing the national anthem!

Also check out this piece from the latest Austin Chronicle on the man.
Posted by Pushermania at 11:45 AM

Wishing Bavu and Tiffany well, I will miss the farewell bash due to circumstances beyond my control. However, I am going to be there in spirit. I have enjoyed Bavu's shows and friendship over the years and he is truly a music lover who supports other artists. I hope Austin makes me proud by coming out and supporting the "foundation."

I too will miss Bavu and Tiffani, haven't had much time to hang since we have three little ones, but we wish them the best. Time does fly. We will be there tomorrow. Hopefully we can link up before they go.