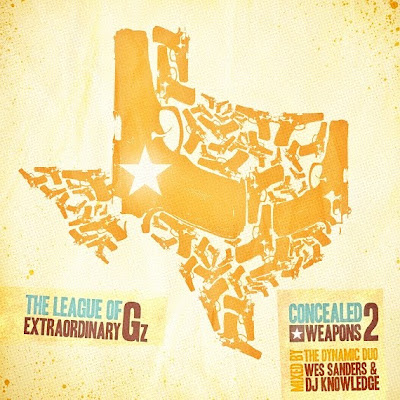 The League of Extraordinary G’z presents one of those cases where albeit feisty brothers unifying instead of fussing and fighting pays clear sustainable dividends. This has happened before in Texas rap, what with the likes of Houston’s South Park Coalition, Street Military, and the Screwed Up Click in tow. Austin’s League continues the brash-in-numbers tradition bringing self-supporting groups Dred Skott, Southbound and Da C.O.D. together for an onslaught of unequivocal street rap.

The second mixtape in the Concealed Weapons series, session begins with “Ha Ha” and four ravenous emcees, Tuk-da-Gat, S.Dot, Greezo and Esbe, running verses back to back, the “evil genius” way. Wrecking instrumentals courtesy of Sade, Erykah Badu, and Drake, the League’s affinity for Andre Benjamin-esque neo-soul softens the blow of their harder-knock tendencies with a pimpadelic touch. On “We Gone Make It” Reggie Coby sums up the League’s splendid mix of the brazen and poignant with “my nigga riding around with a hundred years worth of time in his backpack…the look on his face said pray for me.”

Esbe leads the lifelong struggle between good and evil right “Home” reflecting “hope my sons don’t want to be like pops, this ain’t the life to hand ‘em, but this song that I done showed ‘em, what I picked up from their grandpa.” Greezo reiterates the consideration of regret on the “Window Seat” remix proclaiming that he’s “been trying to change since Obama got elected.” Bolstering his quest for a new start on “Soulja Shit,” Greezo delivers “y’all think we’re out doing felonious stuff, I’m at the crib reading Homer, banging Thelonious Monk.”

Bouncing between borrowed beats and adept original production, Concealed Weapons 2 teems with sharp rhyme quotables. On “Truth” Reggie Coby posits “life is a totem pole, it must suck to be the low one, ‘cause when you at the bottom, they gone treat you like a no one.” S.Dot deposits his two cents on “Satisfaction” throwing shots at “these internet thugs throwing internet slugs, give the cowards a voice, that’s all the internet does.” Positioning themselves alongside Trae in his public battle against mismanaged corporate radio, the League revs up “Trae Day” like a black Shelby Mustang overtaking a fleet of pink Vespas.

As the League puts it, “it’s not always a pretty picture, but it is beautiful.” Truer words couldn’t apply to Concealed Weapons 2 as its 21 tracks build anticipation for a proper League of Extraordinary G’z album come autumn.

By Robert Gabriel
Posted by Pushermania at 1:06 PM

The league fills a very wide void that has been missing in music since the present of super groups like the Wu, NWA and the Dungeon family dispersed. Since that time reality has not been a true part of rap since the flood of "swag" music captured the market. True stories and experiences is what rap was built on and will always remain the core of what true hip hop heads will gravitate to. I am really feeling there new project not only for what is it but what it has the potential to become. We need more of what they are cooking in the kitchen so hopefully we won't keep getting filled up by the bullshit we have been getting feed by the rest of the artist in the game.

Concealed Weapons 2 is some of the truest music i have heard in a long time.. its time to stop believing all the hype that these commercial "rappers" are putting out and those who are industry clowns! Stand up and rise up for all the underground rappers who should be mainstream starting a revolution!