Houston: Win Tickets for the Tontons In Store at Cactus Records This Weekend! 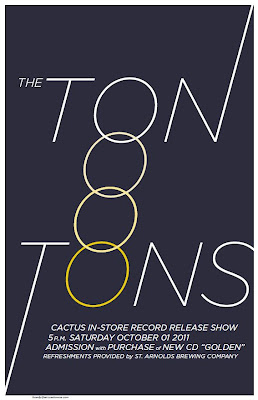 The Tontons "Golden" EP Release and In Store Performance

To celebrate the release of The Tontons "Golden" EP, Cactus Music is hosting a private full length performance which will include music from the new release as well as tracks from previous releases.

Admission is free with the purchase of the "Golden" EP ($5). The album will be available exclusively at Cactus Music beginning Monday, September 26th at 10am. Due to limited space, this event will be capacity restricted, so go early to secure a wristband for the show.

"It's funny. They are one of the few bands in town who don't have a readily available mainstream band to make an off-the-cuff comparison. The Tontons sound like the motherf**king Tontons. " - Craig Hlavaty, Houston Press

"Houston foursome the Tontons sound like they're set for bigger (if not necessarily better) things...the Tontons could fit well on a Rolling Stone "next" list." - Bryan C. Reed, Indy Weekly

First two people to email me on austinsurreal@gmail.com will win a pair of tickets to get in to this exclusive in store appearance. And get your hands on the Golden EP! Its really a whole nother level of jammin out that H-Town.
Posted by Pushermania at 9:05 AM