Aceyalone live in Austin this weekend! 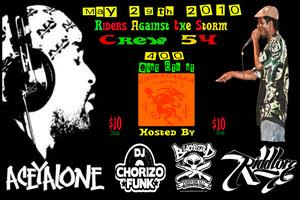 Once again thanks to Robert Gabriel for contributing this.

Aceyalone of the mighty Freestyle Fellowship once again pays Austin a visit from his hometown of Los Angeles.

Opening acts include: Riddlore of CVE, Riders Against the Storm, Crew 54, and DJ Chorizo Funk.

As a member of Freestyle Fellowship and a figurehead of LA's 15-year-old Project Blowed movement, Aceyalone revives old school hip-hop energy as if it never faded. Joining forces with longtime collaborator Riddlore of Chillin Villain Emprire, Aceyalone's rap repertoire is sure to harken back to the glory days of the Good Life Cafe.

At the corner of Crenshaw and Exposition in the heart of South Central Los Angeles, the Good Life Cafe was a weekly open mic night that ran from 1989 to 1995. Catapulting artists including Freestyle Fellowship, Volume10, Ahmad, Skee-Lo, The Nonce, and Jurassic 5, among many others, to national acclaim, the Good Life Cafe has recently been memorialized by a thorough documentary film titled This Is the Life.

Watch the This Is the Life documentary here.