Austin's Phranchyze to compete in the Red Bull Emsee US Final tonight!

It's been a long rhyme coming but tonight it's really goin' down in Atlanta! Red Bull Emsee US Finals, and once again our Austin homey Phranchyze is in the running. And will probably win. #bias

Everyone at the Houston battle went hard, but alas, Phranchyze is kind of untouchable. He's a battle MC Monster and everyone knows it. I think tonight he should do pretty well, no hate towards anyone else, but Phran is a serious MC and about to do some big things. I think his confidence levels at the moment should be through the roof and its really about to go down. Press release info on the event is below. I wish this was gonna be shown online I wanna see how this goes down! 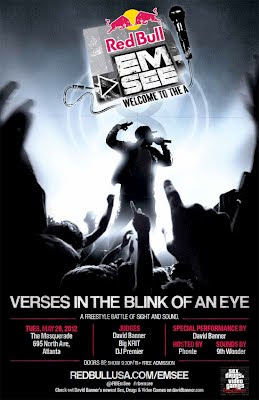 FREESTYLE MCs FROM ACROSS THE COUNTRY HEAD TO ATLANTA TO BATTLE FOR THE RED BULL EMSEE NATIONAL CHAMPIONSHIP AT MASQUERADE ON MAY 29, 2012

Hosted by Phonte with special performances by David Banner, Big K.R.I.T. & DJ Premier And 9th Wonder on the decks Red Bull EmSee is an invitation-only battle series designed to find the best freestyle rappers in the country and give them a national platform to show their skills and earn acclaim. The nine-city tour makes its final stop Atlanta for the Red Bull EmSee National Finals on May 29th at Masquerade with Phonte playing master of ceremonies. Winners of the regional qualifiers hosted in Los Angeles, Seattle, Philadelphia, Houston, Boston, Washington D.C., Detroit and Miami will face off for the national title in front of a judging panel of hip-hop heavyweights, including the dynamic David Banner, Island Def Jam’s Big K.R.I.T and Gang Starr’s DJ Premier; while Grammy-award winning producer/DJ 9th Wonder commands the turntables throughout the competition.

Red Bull EmSee’s innovative battle format challenges MCs to bring the true freestyle spirit back by adding a twist to the conventional head-to-head clash. During the competition, MCs are posed with a variety of challenges designed to showcase their technique, creativity and dexterity. In addition to spitting flows over beats and a cappella, MCs are challenged to come up with hard-hitting verses straight off the dome based on visual cues and words submitted by fans.

“The format of the challenge forces you to stick to the true essence of freestyling, which I think gives it freshness and definite authenticity,” said reigning Red Bull EmSee National Champion, Fowl.

When it’s all said and done, the national champion will earn a trip to Los Angeles to record at Red Bull Studio with a headlining producer of his choice. For more information on Red Bull EmSee, please visit www.redbullusa.com/emsee.