No hyperbole this time...

Duuuuudes. Bavu Blakes & the Extra Plairs, Gary Clark Jr., King Coffey, Lord Fyre, most coolest crowd you ever done seen, um, my mom, sister, and family up in the V.I.P., realest friends ever, um, yeah man, this has been quite a holiday season.

Gary is the future.

And the future is now, real talk, I mean, I keep hearing people complain about the state of music but what are they doing to fix it? 400+ people supported these real artists last night. If people in every town in every country in every world went and supported real art, we'd live in a better place.

The lazy are destroying us, it's true.

Richard Henry supplied the turntables and played with his G1 all night.

But Bavu just killed it.

Lord Fyre on the decks!

Pinetop Perkins was IN THE HOUSE! 95 years young, still killing it on the piano.

And then of course...

It was just silly mayne.

Pikahsso came thru for Bavu's set and made my Mom laugh!

And then of course Clara.

Chillin' with that Bosnian...

AUSTIN TONIGHT IT'S REALLY GOIN' DOWN!!! THE SHOW OF ALL SHOWS!!!

Seriously it's goin' down. Two of the strongest up and coming local artists on the scene in Austin today, PLUS King Coffey of the Butthole Surfers and Lord Fyre of the Soul BBQ DJ's will be digging in their 45 collections and rockin' and sockin' your ass on down all night.

Show of the year coming in just under the wire here. Bring your folks from out of town! Calling all Austin natives in town for the holidaze. Calling everyone who stayed home in the summer like temps as opposed to running to the mountains. Calling one and all, come out to Antone's tonight!!!!

SEE YOU THERE!
matt sonzala
Posted by Pushermania at 10:19 AM 20 comments:

FIRSTLY AUSTIN COME OUT TO THIS TONIGHT! Mr. Cree and Richard Henry wreckin' the decks! 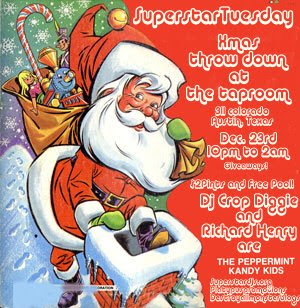 Welp, we done kicked off that Christmas week properly, I tell you what. I love to have Christmas parties, especially where I know most of the folks there and everyone is just friends coming together to spread some cheer and let each other know that yeah, we're here for each other.

Cuz I mean, Christmas can be a rough time for a lot of people. Not me really, it's the one time of the year when my whole family really does get together, and mine is fine. No real problems. But um, I know how it can get y'all. You're broke, your mother thinks you're a bum, the whiskey turns your father into a pervert, the lights won't stay fuckin' lit and the house goes dark every time you turn on the microwave cuz you got about 500000000 watts more of power flowing into your house cuz you thought it'd be cute if astronauts could see your house from outer space, you might have to fly somewhere, like through Detroit, where it's 3 degrees and ice balls the size of basketballs are falling from the sky violently, downing every plane for 15 hours (happened to me once, I landed in my hometown at 12:01 am Dec. 26th and I am not kidding, after HOURS in freaking Detroit Metro.).

Anyway man, turn that frown upside down, it's Christmas, fuck the economy, 2009 is genuinely a whole new year, and we haven't had a genuinely new year in eight years. So have hope this Christmas, and well, quit trippin'.

Where all that came from, I don't know. The party was fun. It went down. We partied. Yes.

Started out with my home girl Alicia Zertuche from Conexion Rockera and our good friend Hermie up in my kitchen CATERING for the event at hand. Black bean and cheese tacos and Alicia's top secret veggie quesadilla's This is the part of the night that REALLY WENT DOWN!

We took turns stuffing, flipping, folding, and such.

Know'm sayin'? Yeah I got them Griswolds

Yeah man, it went down.

So yeah, we all came together and did this. Audra Schroeder was sick and such but she came through for a minute, and then escaped. Here's Sun-Jue who DJed a bit and Amy, who um, had been "baking cookies all day." Look at her eyes and see if you can tell me what flavor.

I'm debating whether I should have one of them cookies right now, before work, or not.

Richard Henry got on and straight wrecked.

JD of Die Dlo was in the house!

TACOS BEFORE THE PEOPLE HAD THEIR WAY WITH THEM!

Leola, Melissa and Sara in the house!

My homey Lolo and I are actually gonna bring you that LADIES OF HIP HOP event real soon. Word to Kris B.!

MY PEOPLE! Lookout for Team Next!

J-Ro in the house!

My wife Melissa and Bavu Blakes!

Me and Robert chillin'! Robert taught me the internet before it became so cool. And we remain homeys to this day.

Sun-Jue bout to wreck the set in her Christmas outfit.

The crowd was motherfuckin' rowdy. Goin' off. Look.

Then I got on an trainwrecked the set and played a lot of Christmas music but mostly the dancey goofy kind I may have downloaded from the Hollerboard cuz people said they wanted to dance, but um, well I guess pretty much not to what I was playing. Which is fine, cuz I think I said it here before, but yeah man, I DJ to make people think. And yeah well, I stay home a lot.

Then my friend Amy the cookie baker took my camera and this is what she came back with.

God rest ye merry gentlefolks, I hope you get some time to chillllll. HAPPY HOLIDAZE FROM AUSTINSURREAL! And Thanks to all who came out.
Posted by Pushermania at 8:54 AM 22 comments: