Davey D interviewed me about Texas Rap and SXSW. Came out good. Davey D is the man.

The 54 Reality Show Covers My Bday and MORE!

Posted by Pushermania at 12:41 PM No comments:

TODAY! 4-8pm at Warehouse Live, Bun B is leading the charge in Houston in benefit of Haiti! We've all been watching the heart wrenching footage, and this is one way that you can help. Wish I could be there...

Friday night in Austin tho, it really went down. As evidenced by the video and photos below. Thanks to everyone who came out to celebrate my birthday and that serious Detroit Hip-Hop. Also Austin, great openers, all that. What a night.

Cuz Black Milk freakin' ripped it with Daru Jones on the drums, a keyboard player and DJ Notion on them tables. IT WENT DOWN!

As you can see here.

N. Brown in the plizzace.

This note made its way onto the stage.

Looking awkward with the ladies...

Daru Jones, man I wish this was less blurry. Ugh. Drunk ass me.

And these youngstaz came out with their parents to this all ages show and I fully endorse this! YES WE CAN turn young people on to good music. Or maybe they are turning US on. Whatever, glad they were there.

What's next? Why, SXSW of course. You might not hear from me much between now and then.

Also I don't answer work questions on Twitter or Facebook AT ALL. So I am not ignoring YOU, I am ignoring all of you. THANKS!
Posted by Pushermania at 8:49 AM No comments:

Posted using ShareThis
Posted by Pushermania at 3:11 PM No comments:

The New Podcast! It's Up!
BLACK MILK LIVE IN AUSTIN FRIDAY!

It's true, Friday night, Black Milk live in Austin. One of Detroits finest. Come see him at Red 7 before he goes all Jay Z big and shit. It's really goin' down and it's my birthday.

Anyway, this podcast is entitled BLACK MILK IS PERFORMING IN AUSTIN WITH DARU JONES AT MY BIRTHDAY PARTY EVENT PODCAST FOR AUSTINSURREAL.COM

Brought to you by N. Brown Clothing.

So, "CLICK HERE TO DOWNLOAD BLACK MILK IS PERFORMING IN AUSTIN WITH DARU JONES AT MY BIRTHDAY PARTY EVENT PODCAST FOR AUSTINSURREAL.COM"

Cuz it's real. And yeah, I know I should drink less when I am putting these together. Also lemme post a disclaimer, I cannot mix, nor do I claim to mix. This is a podcast which is sort of like a radio show and I do this sort of radio show in response to the fact that radio sucks so bad. If I could just sit around and drink and listen to my radio, I wouldn't have to do this shit. I'd probably write more too.

I wrote a short piece, like 750 words, for the next SXSWorld Magazine and left it feeling as though I really need to start putting words on paper again. My original calling, sort of, that I haven't been able to nurture in recent years for economic reasons. I have two books "in the works," and I think I gotta finish those in 2010. Please hold me to it, also yell at me when I don't blog enough.

Did you happen to notice the spiffy new Do512 thang thang to the right of this text? They gave that to me so I can suggest upcoming shows in the Austin area. So, if you have a show coming to Austin, you need to login in at Do512.com and post that shit up. Seriously, its such a great tool. I use it all the time and am really happy to incorporate them into AustinSurreal. Thanks for thinking of me y'all. Anyway, yeah, use it. And I am semi-open for suggestions.

Here's the track list for the podcast. Please listen and enjoy and of course leave me some feedback in the comments section.

And here's a pic of Daru Jones, rockin' them drums and that N. Brown Clothing and such at Peter Rosenbergs Noisemakers at CMJ. Will Peter be bringing the noise (makers) to SXSW????????

It Went Down In San Antonio! Super Soul Shakedown!
Black Milk Live in Austin This Friday!

Maaaaaaaaaan this is one hell of a way to start out 2010, with some seriously soulful hip-hop realness.

As opposed to blog hop.

Anyway, man, IT WENT DOWN and this Friday night IT'S GOIN' DOWN!

Friday night, if you live in Austin, or within driving distance of Austin, and you love real hip-hop, as opposed to blog hop, then come join me at my lil ol' birthday party thang thang at Red 7 and see BLACK MILK (and more) LIVE IN CONCERT!

Presented by N. Brown Clothing, Daru Jones on the drums, DJ Notion on them turntables, it gone be an event, real tweet, I mean talk.

But this past weekend I headed on down to San Antonio for some family love, and got to check out MOJOE live at the Limelight for SUPER SOUL SHAKEDOWN! It's a quarterly soul dance party that just kills. Check the flicks. One of the nicest crowds I have seen in a minute. I mean a month.

Not a huge place, but a nice size and it was PACKED!

Mojoe of course is one of my favorite groups hands down. They are a full on hip-hop band, not just a couple of MCs who threw together a few people behind them, this is a real band.

And they do it so well. For real. I had this vision not too long ago for a whole new movement coming out of Texas, where the real skilled envelope pushers in Texas hip-hop all get it together and hit the world with some of the finest sounds coming out of anywhere but Detroit and I think that's gonna have to happen soon. I am really tired of the truly dope being overlooked man. Seriously.

It's time to put in that work. Sick of this other shit. Blog hop and shit. (I am typing this as I hear Dizzee Rascal play "Flex" on BBC Radio 1 pon di internet, and no, I don't mean Mad Cobra, I mean the Dallas jam. Word to my brother Mr. Rogers.)

Anyhoos, DJ Donnie Dee is a madman on them turntables.

And I REALLY love San Antonio. It's a gem of a city. People just don't know.

I always knew it was dope but I haven't been to a hip-hop show, or any show there really, in some time.

I mean I saw Invincible last year at an art space down there, but haven't been to an SA club in ages.

I know you feel me. Anyway, I slacked on the crowd shots, cuz I was so enamored with the jams.

I saw more dope grafitti in one day in San Antonio than I have in the last year in Austin. No disrespect to Austin graf writers, maybe I don't know where to look these days, but man I was riding around SA like DAMN!

Yeah, San Antonio got me a lil open.

And every club in SA should have a painting like this hanging prominently. This is RAM> He owned Taco Land for many years which was and I think still is one of the main places for new bands to play. I was there a bunch of times in the early 90's. It was like indie Heaven and Ram really supported music more than almost anyone I ever met. Dude was a champ. I don't know the whole story, but from what I heard, a few years back a dude ran up in the club and shot him dead, at point blank range. I don't even know if there was a reason, I just heard dude was crazy. And it's a damn shame.

SMH at the world, but his memory wil never die. He meant a lot to San Antonio and to every band that ever passed through his club and played on his stage. A beautiful person if there ever was one.

Anyway, come see Black Milk on Friday. I'm almost 40 and I'm going to neeeeeeeeeed you to help me feel better about myself.

Major SXSW Hip-Hop Announcements coming soon. If you did not apply, it is way too late. But um, plenty did and it's REALLY GOIN' DOWN!
Posted by Pushermania at 8:38 PM No comments:

If you are in San Antonio lets kick it. 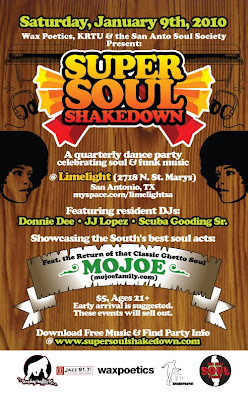 Posted by Pushermania at 12:14 PM No comments:

MAYNE HOLD UP! Someone forgot to tell someone that January is supposed to be a slow month for shows in Austin. Cuz here's two great ones!

Yessirrrrrr Lil Wayne returns to Austin, to the Travis County Expo Center to be exact, this Wednesday night January 6th. Last time he was in town it was one of the biggest turn outs for a rap show ever in Austin. This time around expect no less as after this show, we may not see Wayne in concert for a year. What with being locked up in NYC and all.

Get Your Tickets NOW on GetTix.net They WILL SELL OUT!

Rumor has it that some of the Young Money camp will be in the building. I doubt that means Drake, cuz I am sure they would be hyping that, but maybe we will see Nicki Minaj.

And San Antonio's own KYLE LEE will be performing, but I have no idea who else is on the show. Who needs anyone else, probably be best if its just Wayne anyway.

That being said, I'ma be out there.

Then, my birthday is January 16th and N. Brown Clothing is throwing me a party on FRIDAY JAN. 15TH with one of my current favorite rapper/producers - BLACK MILK!

Man this is gonna be a night to remember, it deserves its own post for sure, but I wanted to put this flyer up under Lil Wayne cuz you know, all the kids love Lil Wayne,but SHOULD ALSO KNOW ABOUT THAT BLACK MILK! And the fact that Detroit is the current Hip-Hop MECCA. Man, look for more Detroit hip-hop to hit Austin, ohhhhh round about SXSW. I cannot wait to start announcing some of the SXSW hip-hop shows we have lined up for y'all.

If you have not applied, then you are too late to get a performance but I hope that no matter who you are or where you are from, you are considering coming down to Austin March 17-21 cuz it is at that point at which IT IS REALLY GOIN' DOWN. And such...
Posted by Pushermania at 8:32 PM 1 comment: