Man! It hits me every freakin' year. Just a couple weeks after SXSW ends, the Texas Relays start. That's way too much partying in two weeks time for even the most fervent college age spring breaker, let alone my old ass. But I'ma try and see what I can see. Rest assured these flyers only represent a small percentage of what's gonna be on and poppin' in the city this weekend.

I heard Bizzy Bone and Hurricane Chris has a show at the Expo Center and Bavu Blakes will be live in concert at The Highball. Need to find those flyers.

Also Happy Easter. Click all the flyers to see them full size!

First up a benefit for the big homey J. Kapone. As some of you may know, he was picked up on federal charges as part of a bit of a sting in Austin recently. Well J. was picked up in Memphis, but it was part of a bigger thing. Help the man out, he, like everyone else in this world, deserves a fair trial. 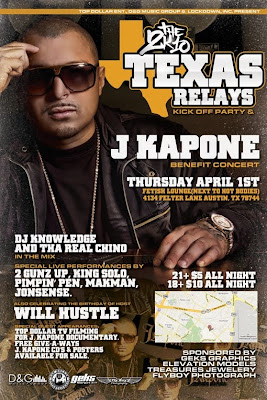 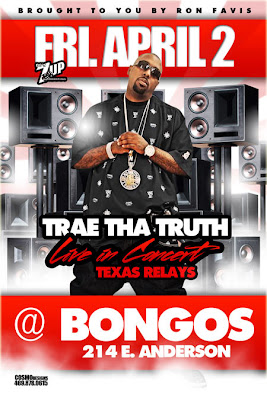 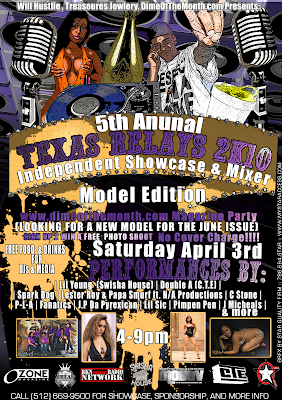 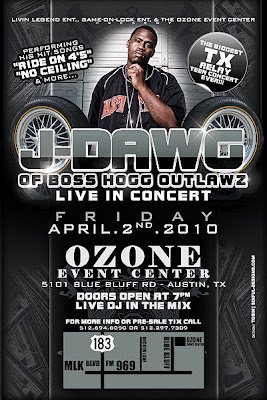 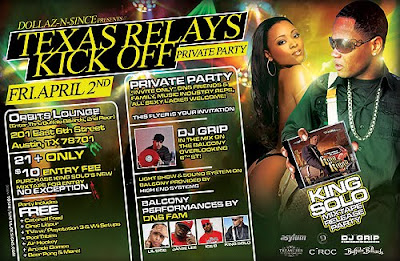 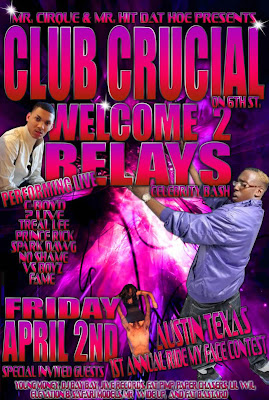 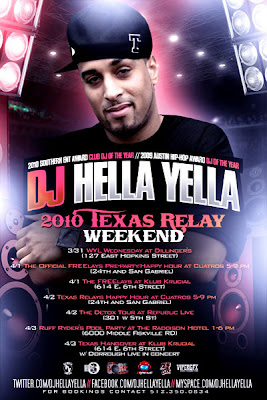 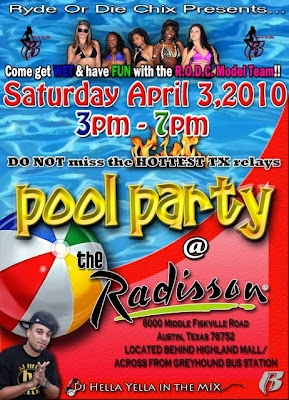 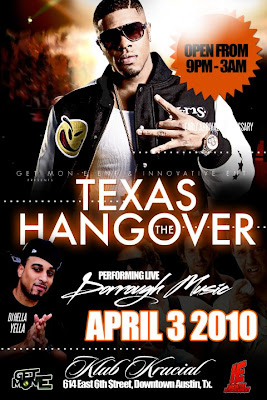 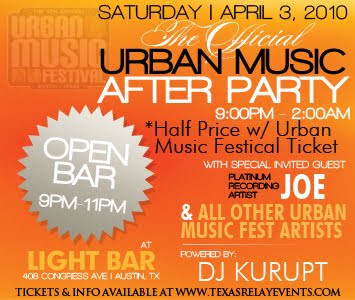 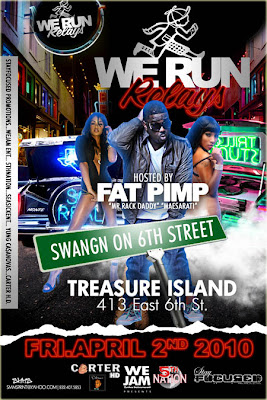 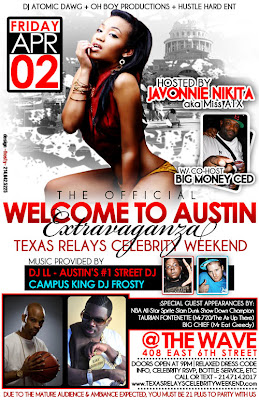 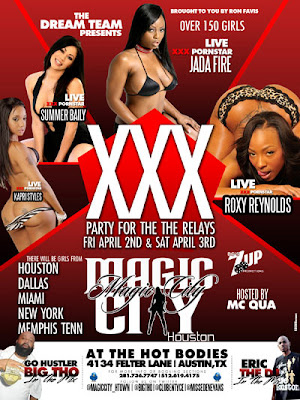 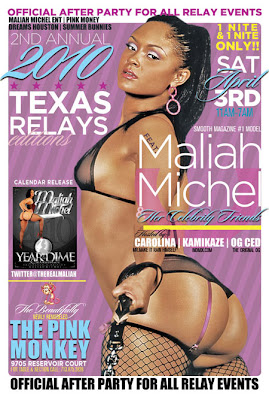 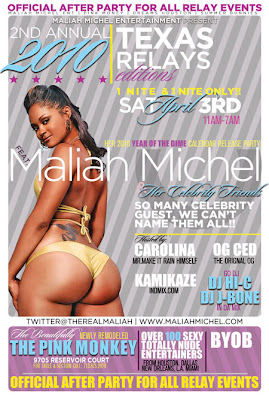 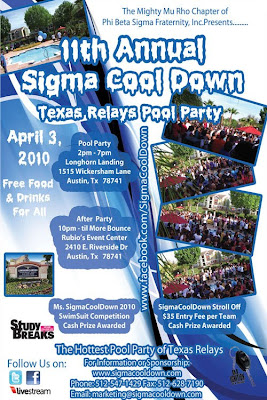 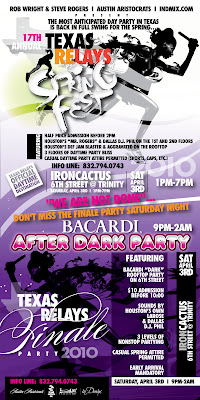 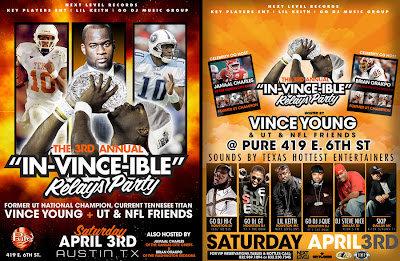 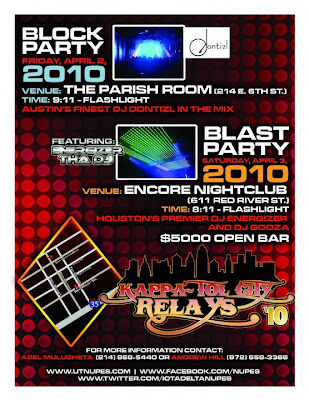 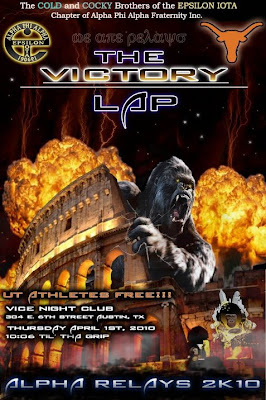 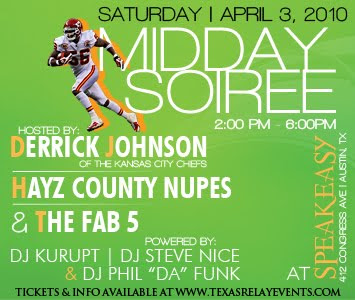 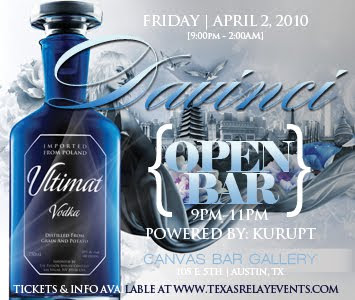 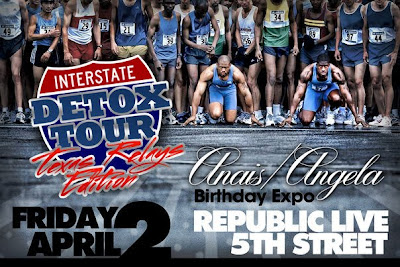 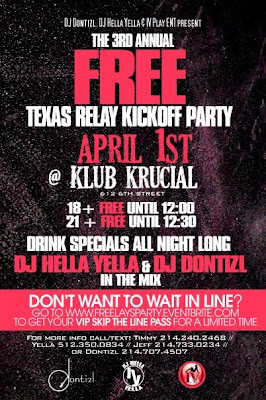 Posted by Pushermania at 4:03 PM 4 comments:

Been trolling the internet the past few days looking for footage of shows that I missed, or may have seen and wanted to remember again, and well here's a gang of good stuff from SXSW 2010! Word to Davey D and The Southern Shift for all their tight work especially!


Killer Mike does one of my favorite songs at SXSW


Cool Kids Live on the outdoor stage at SXSW


Fashawn Live at the Biz 3 Showcase at SXSW

Posted by Pushermania at 8:14 PM No comments:

The Clipse RETURNS TO AUSTIN, TX! 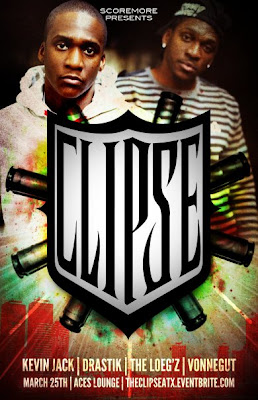 Yeah man it's really fuckin' goin' down. After an insane week of SXSW Hip-Hop we jump right back into it and go see Clipse. Why not? It's Austin.

Get tickets in advance here: http://theclipseatx.eventbrite.com

Made possible by: Complete Clothing, Keep It Local, Scoremore, Polaris Presents, ATXHIPHOP.com and YOU!

Play Clothes Presents The Clipse Meet & Greet at Complete Clothing, Thursday evening from 6 - 7p.m. Slide thru there then hit Ace's early and get to drinking. Ya Mo Be There.

Posted by Pushermania at 4:24 PM No comments:

Well yeah man, it's true, it really went down.

Looking back, I really wish I could have taken more photos, but in fine Austin Surreal form I set out to the streets with a half full camera battery and dead ass flash batteries, and a flip cam I never took out of my back pack, and well, this is what we've got.

But oh what a year. I'ma holler at my bro OG over at Luxury Mindz and get some more photos for y'all, cuz, man, shit, it really went down. Apologies to anyone I didn't catch...

The week started out pre-SXSW Music with a gang of Interactive and film events, but I broke out the camera at the Gaslamp Killer joint at Beauty Bar last Monday, cuz that's where we were assembling the troops, getting our bearings for the week, so to speak.

One, said, Gaslamp Killer. If you have been listening to the radio show I now do on Radio KAOS you have heard jams from his latest project Gonjasufi - A Sufi & a Killer.

Anyway it was here where the troops werre assembled.

Ready for the streets to explode 2 days later.

DJ Jester was in the house.

And the week was motherfucking on.

Wednesday we of course started out at the Best In Texas show at La Zona Rosa, presented by AllHipHop and OGPR. Massive respect goes out to Nancy Byron, my sister, and friend and THE Rap Publicist of all Rap Publicists. @rappublicist indeed

Suffice it to say it really went down, DJ Hella Yella, seen here, held it down all night along with the crew from Dollaz N Sense.

Fat Pimp done came out and kilt it.

And I got a photo of Heidi with Killer Mike.

And of course, I had to get one with hands down one of my favorite rappers, and rap people of all time, Killer Mike, Mike Bigga, we gotta do some shit in 2010.

Had to make rounds all night, so we left La Zona and headed to Speakeasy where the front room hosted the Senari joint and the back room hosted the Stones Throw joint, I mean, yo, seriously, there wasn't much going on anywhere in the world that could much fuck with what was going on under the roof of the Speakeasy on this particular night. Real talk, it couldn't get much better than this.

Puja and Heidi and Cousin Cole

And then there's an old man with Puja

We then hoofed it over to Karma for the Nerdcore showcase. And were greeted by none other than Terp 2 It

And saw Candace from Pitchblend Media

And saw JoiStarr too! WOW! I first met her on a small wooden boat in Norway. Look at her now.

Back at the Best in Texas

YELAWOLF made quite an impact this year at SXSW. I been listening to "Pop The Trunk" over and over like 70 times in the car this week.

The legend John Shaw aka J. Dogg from Select-O-Hits and Murder Dog. This man done touched and helped and distributed more real independent rap records than maybe anyone else on this earth. LEGEND!

These kids were real cool and in the fuckin' house.

Nick D of the Kriminals and Lowkey

Trae and the whole ABN came out and destroyed it of course.

Paul Wall & Chamillionaire truly killed it. I haven't seen them together in years, and man I didn't know if they'd still have that chemistry, but tonight, they really did. They really put on a serious show. Over an hour. No frills, just dope raps and tons of interaction and just made me real happy to see them on stage again.

Kid Sister was side stage

Square Dancing with her brother...

It was all love.

The next day Exhibit Hall 3.

Feargal Sharkey, singer of The Undertones, whose song "Teenage Kicks" was the favorite song of all time of John Peel, checking in, early in the morning time.

That night, my first stop was Ace's, for Peter Rosenberg's Noisemakers with Bun B. I had to see this one.

Didn't catch it all, but I'm dying to see the video. Seen here, Bun B, Rapid Ric, Peter Rosenberg.

THEN hightailed it over to the east side, with a quick stop at the Scoot Inn for the Wax Poetics event.

Heidi wonders if this cat is deaf.

Keys N Krates came down from Toronto and fuckin' destroyed it. Whole place was crunk.

Highlight of my whole event though was seeing my boys Grimy Styles back Jovi Rockwell. Man alive, this shit was out of this world.

Favorite set of the whole shit.

Hopefully you'll get the chance to see this as well.

THEN we hopped on the electric scooters - which I should talk about in depth on another post cuz man - and hit the Detroit showcase at The Victory Grill.

Crown Royale - Buff 1 and Rhettmatic were on the stage!

THEN Hit up The Independent where Blacklisted Individuals performed the livest set I saw. That shit was like on Olympic Proportions. With the live band and the breakdancers and the extreme energy.

Then it was back to the Scoot Inn for the Black Dynamite Sound Orchestra.

THEN! It was BACK to the Independent to see DJ Spooky with Graham Reynolds.

And what have you.

Friday started out at the Duck Down 15th Anniversary Event. Dante Ross, Buckshot and Dru Ha seen here on the, what do you call that? Step and Repeat? Backstage.

Kidz in the Hall!

Hopped on the scooter and hit up the women's show just in time to see Eyeris get off stage and Perseph1 get on.

Who of course kilt it, seen here with DJ Skeez.

Eternia came off like crazy. Her show is NO JOKE!

And then like seriously, my camera really started to die. There's so much to blog about from Friday and Saturday, and I'ma try to find videos from all this shit as well, but for now, I gotta leave you with this...

The show of shows..

A serious rock and roll explosion. But seriously, Saturday was insane. The temperature very suddenly dropped to 40 degrees, my fingers were frozen, I really didn't take many photos, but I did get to check parts of the New Orleans Bounce party, the Respect the West showcase, the Baltimore joint, I mean, I need to get some more footage. Shit was just too hectic to document it all.

But the afterparty was off the hook. Mostly ladies.