I don't normally post press releases but this news is really great. 007 is an old friend of mine, I was a big supporter of the 5th Ward Boyz, and when he went to prison, that really killed me man. Then when Lo Life went to prison, and E-Rock was the only one still out, I was totally floored. Lo Life is still locked up, E-Rock is on the music grind coming with new stuff constantly and rolling a lot with the Coughee Brothaz, and now 007 is on a much better path. I saw him at SXSW and he just looked revitalized man. So happy to see this. Anyway check it out. 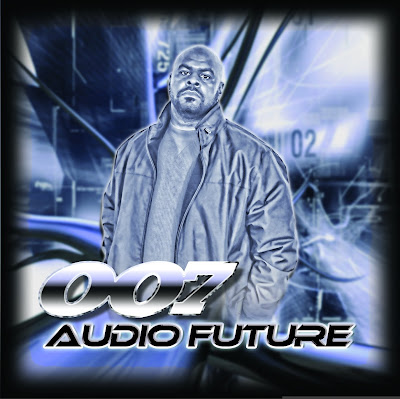 After dropping 5 albums in 2009, Much Luvv Records has hit the ground running with former 5th Ward Boy, 007. It was in January of 2010 that the independently owned and operated Christian hip hop label released former Rap-A-Lot artist Bushwick Bill, album entitled, Testimony of Redemption, in a joint venture deal with G.S.P.O.T. Productions. Now they team up with 007's Judah Music Group and present Audio Future.

Andre “007” Barnes’ story is not unlike the Apostle Paul.

In the mid-90’s he gained fame and notoriety as a founding member of the hard core gangsta rap crew the 5th Ward Boyz. Signed to Houston’s infamous Rap-A-Lot label, the group had several hits that celebrated the gritty, violent, and often-profane street life in which they grew up. They recorded and performed alongside of some hip hop’s biggest names including Tupac, Notorious B.I.G., UGK, Bone Thugs-n-Harmony, and the Geto Boys. Just Google search the 5th Ward Boys, the proof is there.

Unlike many of today’s street rappers, 007 was never a “studio gangsta.” His lyrics reflected his actual life. That included a murder case for shooting and killing a man trying to steal his car (later ruled a justifiable homicide) and armed robbery as well as selling and abusing drugs.

Although he continued to see paychecks from Priority Records, Virgin Records, and Rap-A-Lot Records, greed consumed 007. After a European tour in the year 2000, he was caught robbing three banks and sentenced to more than four years in prison.

Upon his release he was asked by Matthew Knowles to write and produce music at Music World Studios (home to Beyonce Knowles and Destiny’s Child). But even this second chance couldn’t keep him out of the life of crime and he was eventually forced to serve an additional 15 months behind bars.

It was there, in jail once again, that Andre Barnes had his “Road to Damascus” experience. Finally encountering and understanding the true grace of God through the sacrifice of His one and only son, Barnes began to change.

When he walked out of the yard this time around, it was with a renewed mind. Barnes pursued ministry, established Taking Back the Streets, and opened Blessings Christian Bookstore with his wife and family.

Now a new creature, 007 has returned to the mic with the goal of using hip hop to glorify Jesus Christ. With a beat background that sounds like it was created in a time machine, Barnes adds sensible, street lyrics to what he’s calling the Audio Future. On this album, he shares his testimony and attempts to warn others of the sinful snares that robbed him of so many productive kingdom years in his past.

The debut release from Much Luvv Records/Judah Music Group, Audio Future, releases this Tuesday April 20th via Central South/Infinity Music Distribution. Pick up his new album at your favorite online retailer. You can also visit your nearest Christian retailer to cop the CD!

THAT WAS A REALLY INTERESTING LIFE THAT DUDE LEAD...