OK So you already know what you are doing this Friday night in Austin (#NewTexas), but this Saturday may be a quandary. Two super hype parties. Including the Austin debut of THE DO-OVER! 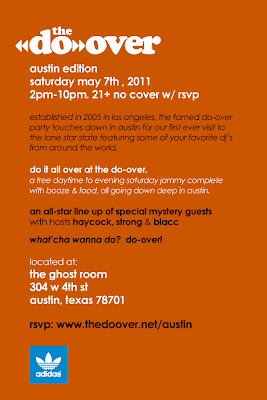 Word to DJ Mel just look how hype this is gonna be!

In the summer of 2005, Chris Haycock, Jamie Strong and Aloe Blacc set out to offer something different and unique to Los Angeles. We wanted to create a day that would integrate the city racially, socio-economically, and most importantly, musically. Together we imagined an event where all styles and smiles could be brought together by the force of quality music. As we celebrate our 7th Year Anniversary, we realize that the "little-idea-that-could" has morphed into something bigger -- much beyond our wildest expectations. It has become a party FOR THE PEOPLE and BY THE PEOPLE featuring your favorite DJs and their favorite DJs who remain a complete mystery week in and week out.

People come to Do Over for the music, the friends, the vibe and the surprises. It is more than just a party. For many, Do Over is a way of life and an outlet to celebrate originality. From May through October, black, white, brown, gay, straight, rich and poor come together each and every Sunday to DO their weekend all OVER and get down to the sounds of hip-hop, funk, house, disco, rock, jazz, reggae, latin and beyond.

“One of The Top 5 Summer Parties” - THE FADER

"The laid-back house parties and grill-fests at Crane’s on Sunday afternoons are kind of like church, but with a better
wine list. The free weekly event brings together perhaps the most ethnically diverse crowd in town." - LA TIMES

”The anti-Hollywood backyard boogie… Do-Over is the Sunday sure-thing that guarantees a weekend happy ending.” -
LA.COM

Suffice it to say it's really goin' down.

And then if that's not really your cup of tea, maybe LIL FLIP is. 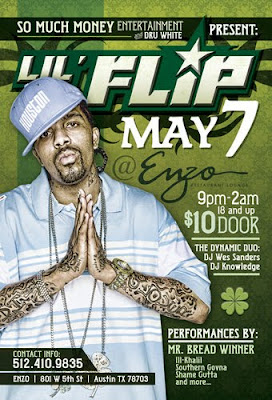 That's right, Lil Flip is coming to Austin and he gone treat you like milk! I swear! What a freakin' weekend!
Posted by Pushermania at 4:09 PM