MAN! Hold up, they done outdone theyselves this time. 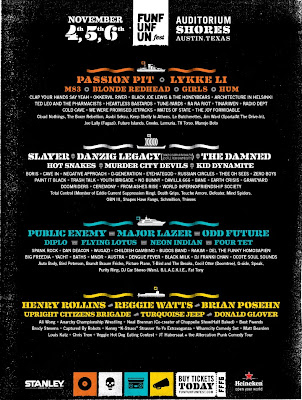 www.funfunfunfest.com for tickets. GET ON IT! THIS WILL SELL OUT!

The Transmission Entertainment team, who produces Fun Fun Fun Fest, once again has delivered on an exciting and genre-blurring (from hip hop to indie rock, punk rock to dance, metal to comedy) mix of old and new acts, while keeping their reputation for being a festival offering a unique genre based stage system, rarely-seen performances, newly discovered talent, and anticipated reunions.

The 2011 headliners include everything from indie dance darlings Passion Pit to heavy metal gods Slayer, from hip hop legends Public Enemy to punk icons The Damned. This year, FFF reunions include Hot Snakes, who disbanded in 2005 at the height of their popularity, Hum, who have not been consistently active as a recording or touring group since 2000, and Glenn Danzig playing Misfits songs for the first time in years with original Misfits guitarist Doyle Wolfgang Von Frankenstein. More bands are planned to be added to the full FFF line up in Aug/Sep.

When asked about this years event, Graham Williams, FFF Founder had this to say: “It’s been so hard to keep the lid on everything we have been working on, there are so many exciting bands and acts this year, and so many more to come.” He added “This is clearly the best bill we have ever put together, and I can’t wait to watch it all happen in November.”

‘X’ will no longer be performing at Fun Fun Fun Fest as previously announced, as they are on a new tour. They have been replaced by legendary gothic punk band, The Damned, known for being the first UK punk rock group to release a single, an album, to have a record on the UK music charts and to tour the US.


Fun Fun Fun Fest encourages you to travel smart by biking, walking or carpooling to the festival grounds, as parking will be limited and not permitted in surrounding neighborhood areas. Parking options and more can be found at funfunfunfest.com.
Go to www.funfunfunfest.com for updates and to purchase tickets. You can follow the fest on Twitter @funfunfunfest for up-to-the-minute news, or you can become a Fun Fun Fun Homie at Facebook at facebook.com/funfunfunfest.
Fun Fun Fun Fest would like to thank you to all of the partners who help make the festival possible, including Heineken Light, Stanley-PMI and many more.
ABOUT FUN FUN FUN FEST
Fun Fun Fun Fest booked its first set of acts in 2006 in downtown Austin, leading with the likes of Spoon and The Circle Jerks… setting the tone for what would grow to be the darling of independent music festivals for music lovers and music makers in the United States for years to come.
Now in its sixth year, Fun Fun Fun Fest is an independent genre based festival, known as one of the most relaxed, creative, and pioneering festivals in music today. Fun Fun Fun Fest is a fest that is custom booked for the most passionate underground and progressive musicians, comedians and fans around the world.
PRESS CONTACT:

Go to www.funfunfunfest.com for updates and to purchase tickets. You can follow the fest on Twitter @funfunfunfest for up-to-the-minute news, ticket giveaways, or you can become a Fun Fun Fun Homie on Facebook @ facebook.com/funfunfunfest
Posted by Pushermania at 1:13 PM