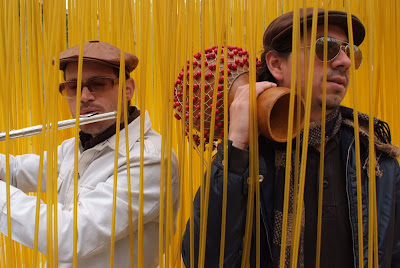 Hands down one of my favorite groups to see live. A cut above the rest and a breed of their own. Just super real.

Help them hit the road this December (after a serious show at next week's FUNFUNFUNFEST here in Austin). Check out their KICKSTARTER PAGE and give these folks a helping hand. If anyone deserves it... And the world needs music like this to travel to many, many different earholes.

Co-led by Adrian Quesada, of Grammy-winning Latin ensemble Grupo Fantasma, and Martín Perna, of Antibalas (the famed afrobeat orchestra associated with the acclaimed Broadway musical Fela), Ocote Soul Sounds warm things up this December when the band sets sail in support of their fourth studio album, Taurus, out now on ESL Music.

Taurus sees the cosmic producers honing their signature psychedelic, analog funk infused, Afro-Cuban sound and crafting an album bigger than any of their previous efforts. That's not to say it's a massive departure from their back catalogue, but this time, the vibrations are stronger, more muscular and confident. Marking their first time working with an outside producer, Eric Hilton of Thievery Corporation, Ocote Soul Sounds maintains their cosmic ambiance while building on the pan-Latino rhythms that have become favorites of dance freaks and headphone space cadets alike.

And then of course there's this:

Posted by Pushermania at 4:07 PM