First event in the Hip-Hop The Vote Series in Houston happens this coming Tuesday Sept. 25th in 3rd. It's National Voter Registration Day and Texans Together is presenting a special concert/awareness event at the Reggae Bodega/Irie Juices at 4812 Almeda Dr, featuring Chingo Bling, Doughbeezy, The Niceguys and Dat Boi T.

(Houston, TX): The first of a series of Hip Hop the Vote music events will take place this Tuesday, September 25, 2012, 4-8 pm, at Reggae Bodega/Irie Juices at 4814 Alameda Road. Well-known Houston hip hop artists, Chingo Bling, Doughbeezy, The Niceguys, and Dat Boi T will perfom and promote non-partisan voting. At this family-friendly event, the artists will promote voting to younger, multicultural Houstonians who have low voter registration and turnout. Deputy registrars will be there to help citizens register and to answer their questions about the voting process.

What: Texans Together Education Fund dba Occupy the Vote-Houston team up with promoter Matt Sonzala to present the first in a series of Houston Hip-Hop The Vote Events!
When: Tuesday Sept. 25th - NATIONAL VOTER REGISTRATION DAY- 4-8pm
Where: The Reggae Bodega/Irie Juices - 4814 Almeda Road.

Why: The purpose of this series of music events is to creatively engage young adults in Houston’s communities to get them excited about registering and voting in November. Harris County is estimated to have over 600,000 eligible unregistered citizens in Harris County to register. The deadline for registering to vote this November 6 is fast approaching: Tuesday October 9, 2012. Those least likely to be registered are the young, minorities and lower income people.
WHO: Performing Live - Chingo Bling, Doughbeezy, The Niceguys, Dat Boi T aka Screwed Up Essay
DJ Chill on the wheels between acts/speakers.
Guest speaker - Zin from KPFT's SOS Radio with more to be announced soon.
Texans Together Education Fund is a 501c3 nonprofit organization that civically engages people in under-represented, underserved neighborhoods. 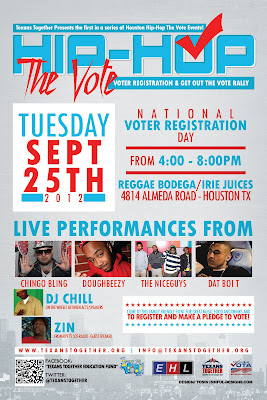 Holler at me and come out Tuesday it's really goin' down!
HIT THE FACEBOOK EVENT PAGE
Posted by Pushermania at 10:16 AM