And then of course the after parties for you young 'uns.

GET YOUR TICKETS HERE AND I HOPE TO SEE YOU THERE!

This'll be my first FunFunFunFest, and I couldn't ask for a much better line up. Here's my picks for the weekend.

Stage 1
Deerhoof - 6:30 - 7:30 p.m.
I've never actually seen Deerhoof live, but I jam all their albums. They had one that came out in like 2001, just before my daughter Eva was born. I recorded it on to cassette so I could jam it in the LTD my grandfather left me when he passed, and really wore the thing out. We listened to it so much in fact that when Eva was just about starting to talk, she'd sing "Flower, flower, flowww-er-uh" along with the song, I guess that was called "Flower." She'd also grab the speaker and dance to Dizzee Rascal and sing "I LOVE YOU. I I I I I LOVE YOU!" every time it would come on, but that's a different story. Then we all freaked out when we saw them on Pancake Mountain.


Atmosphere - 7:35 - 8:35 p.m.
You can't front on the cultural relevance of these dudes from Minneapolis. I once may have, like say the second time I saw them live. The first time I saw them live was at the Backroom during SXSW, possibly in 2000, maybe 2001, actually, probably 2001. At that show, I kind of stayed in the back and saw a few white dudes on stage, rapping and I was like whatever man, there's 10 groups tonight, I don't need to start gettng aggravated quite yet. So I stayed in the back.

And didn't really even realize who they were, even though the show's host of the evening, Chuck D, gave them crazy props. Though he also released a group of white rappers from Long Island called the Young Black Teenagers, back in my youth, that offended me to no end, so I only gave that co-sign from him a slight nod.

Anyway, a couple years later, I was living in Chicago and reviewing shows for the Illinois Entertainer. I'd go to The Metro anytime there was a hip-hop show happening, mostly because there weren't too many other venues really fucking with hip-hop at the time. They'd have these huge bills with every backpacker you could ever name, on one stage, on one show, like monthly. Well one time when Atmosphere came to town, my editor asked me to go review the show. I walked in early, found a seat on the balcony and marvelled at the legions of kids who were pouring through the door for this group I thought I had never seen before. 1,100 people filled The Metro that night, and every single one of them rapped along with Slug and Eyedea. DJ Abilities was on the tables. I was like, damn this is those dudes I saw in Texas. They were killing it, but I wasn't totally sold. Amazed, but not totally sold.

Then I'd see them again and again, dudes constantly stay on the road grinding. I saw 'em in Houston a year after that show in Chicago and they performed for under 100 people. I saw 'em in Houston a couple years after that and Slug with full band filled Warehouse Live with like 1,200 people. Atmosphere is a bit of a phenomenon man. Just a testament to the grind and to just giving yourself to the people.

Atmosphere live in Austin in May.


Stage 2
Golden Arm Trio - 4:35 - 5:15 p.m.
Local jazz/improv/experimental legends. I honestly don't know a ton about Graham Reynolds and his ever changing group. But I have seen them a few times, and it's always a radically different experience. What he has in store for the punk rock festival crowd, I don't know but I'm way into finding out.


Neil Hamburger - 8:45 - 9:45 p.m.
Dry, wry, beligerent yet understated wit that pokes fun at pretty much everybody. Insightful in his insolence.


Stage 3
Killdozer - 4:30 - 5:15 p.m.
One of the rawest rock experiences ever committed to tape or stage. Heavy, hard, edgy and poetic. Dudes one of the best story tellers ever in the game. But you don't hear me though...


Integrity - 7:00 - 7:45 p.m.
Not sure why I'm really recommending Integrity, as honestly they might possibly be the band I hated more than any band I have ever hated before over all of eternity. Of course, that was when I was like 17, and they probably love that they were hated. They were always easily hatable, which made them ultra-beloved by legions of disenfranchised, pissed off, hardcore kids throughout the late 80's, and I guess parts of the 90's. They combined metal evilness with hardcore fighty-ness and tore up stages, and young kids faces from coast to coast.

I actually broke a knee at an Integrity concert in Warren, PA in 1991. But that's a really long story.


All - 7:50 - 8:40 p.m.
The first promo records I ever received were The Descendent's ALL and Bad Brains I Against I, they came in the mail, in the same package, and set off a life of psuedo music journalism for me. So I pretty much followed those dudes all the way through the break up of the Descendents, the All thing, the Descendent's reunion, etc. Not sure who's gonna be singing on this one, but it'll be fun.


The Dead Milkmen - 8:45 - 9:45 p.m.
Was honestly never a huge Dead Milkmen fan, I can't deny it. I tried buying a record once, but it didn't work out. See one time I went to the mall and was planning to buy some records. I didn't see anything I was too excited about, but I saw this Dead Milkmen album on cassette for like $4.99 or something. So I decided to give it a try. Having never heard them, I popped it in and it was some of the most raging death metal I had ever heard.

The couple kids I knew in school who liked the Dead Milkmen, certainly weren't into death metal, so I really didn't get it.

Turns out, their label fucked up and this Dead Milkmen tape was actually a metal compilation the label had put out earlier in the year. Nasty Savage type shit and shit. I actually wish I still had that tape.

Anyway, here's the big one.


That was one of those videos I'd look forward to every week on 120 Minutes. Post-frad tape purchase.


Dengue Fever - 2:00 - 2:45 p.m.
MOST ANTICIPATED SHOW OF THE WHOLE EVENT. By me at least. When they played Mohawk earlier this year, some of my favorite people insisted that we come out and check the show. I had no idea, I thought they were some California whiteys playing some sort of "ethnic" music. I had no idea they were the real deal smashing fools hard with the realness. Yeah, I wasn't paying attention. I was sleeping. Till this year. They are pretty much, where it's at. To me.

Stage 1
Black Joe Lewis & the Honeybears - 2:10 - 2:40 p.m.
Man, one thing I will tell you about this dude and these dudes is that every woman I know thinks they are about the best thing happening in Austin right now, and they go see them perform every time. So yeah, get there early. Me personally, I think they are up there with the best things going in Austin. A real, genuine, souled out blues review of genuine jams. Dude's really got something...


Stage 3
The Cynics - 2:35 - 3:50 p.m.
Like I said above, I grew up in Erie, so yeah man, I naturally have a real affinity for Pittsburgh rock. One of the more rock centric cities I have ever been to. These dudes ruled a slight part of my teen years on the rock side of things.

Covering "I Got You Babe"


Cro-Mags - 6:50 - 7:35 p.m.
Honestly I kinda feel like their only really great song was their big hit, "We Gotta Know." And man, that was a raging song, one of the best hardcore songs ever, IMO. But man, I honestly never went nuts for Age of Quarrel, or anything else they did. I know they were running shit and all that, but that sound wasn't really mine. I am however curious to see how the 2008 Cro-Mags get down.

Also one of the greatest videos.


Stage 4
Zeale & Phranchyze - 1:35 - 2:05 p.m.
Yet another reason to get down to the park early. Zeale and Phranchyze are two of Austin hip-hop's brightest hopes and most deft showmen.

Also curious to see them up in the FunFunFunFest.

Grupo Fantasma - 7:30 - 8:30 p.m.
The hardest working band in Austin, that tours with Prince, backs him at like, the Super Bowl and shit. Yet still finds the time to stay thorough in their homebase. These dudes are like the heartbeat of Austin for real. Legends.


Clipse - 8:45 - 9:45 p.m. -
How they get on every festival in the world, I have no idea, but they do. Deft Cocaine raps for the folks who are probably gonna head to the Beauty Bar after the event. On a Sunday even.

So that's next weekend, holler if yer in my town. Email address up above to the right.

Last night though, The Mountain Goats passed through town with Kaki King and sold out Antones. 700-some people packed up in there, singing along to the sing alongy parts, and being dead silent for the quiet parts where John Darnielle would lull out on the acoustic guitar for a minute. I swear, they'd go dead silent, and erupt into applause when he was done. Mountain Goats fans are so polite.

Blurry photos for a blurry night.

Also next weekend if you happen to be in New Orleans, my man Noah is putting together another HIP HOP FOR HOPE event! 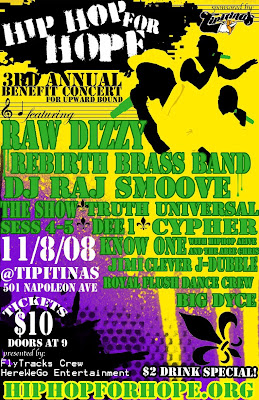 And I'll be in Los Angeles all week so lemme know what's poppin' out there. Email addy above right of the page.

Posted by Pushermania at 1:28 PM

Damn, mang! Thanks for the thorough overview. Some thoughts: You're from H-Town, why were there so many sorry ass rappers in the WRC battles there. Those dudes getting served by Zeale & Phran are straight garbage!

I would argue that Dengue Fever are indeed a bunch of California whiteys playing ethnic music. They just happen to kick ass and have a Cambodian singer.

Oh, and check for my preview/interview with Kool Keith in this week's Chronic. My man is not quite right in the cabeza.

Co-sign on most everything else. Peace!

PS - How the hell are Nice & Smooth and Black Sheep playing the same night as Digable Planets?!! That breaks my heart.