I've BEEN saying that this needed to happen. Maybe even since satellite radio came into existence. They needed to have a studio in our little musical town, and now they do. Word them up, as they say. 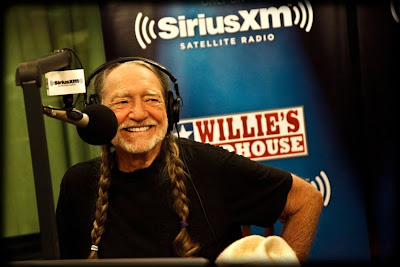 I am very much in favor of anything that provides an alternative to what has happened to terrestrial radio. I've always had a bit of a fantasy of getting on satellite radio with the jams, but always figured I'd have to move to New York to do so, and that ain't happening. I'm way too lazy for New York. And too impatient for public transportation. And get really insanely angry when I have to pay $12 to go through a tunnel or over a bridge. But whatever. Things about Austin make me mad too.

Whatever happens I am just glad that more cool things like this are coming to our city. When we had a 3 month trial of SiriusXM in the Honda, Willie's Roadhouse was one of the channels I'd tune to the most (sorry Shade 45 but I had the kids up in the car a lot, they kinda think hip-hop is silly. They didn't complain when I'd have Backspin on though). Shade 45 is dope though, and pretty much reason enough for any hip-hop head to make the investment. With commercial radio limiting themselves to 4 artists and 13 songs at any given time, and college radio being almost gone for hip-hop, well yeah, this is where it's really at. I can only jam YouTubes and Soundclouds so much. I'm actually a person who likes it when a real person hips me to new things. Call me crazy. Word to Tony Touch.

So yeah lemme know when you want a Live from the Dirty South show SiriusXMers (or something like this), now that I am unemployed (Oh yeah I forgot to tell y'all, lol). I'ma have to subscribe now. Opening reception next Friday, but I'll be at A3C fest. More on that later. official press release below. Get hype.

SiriusXM will host a grand opening event on Friday, October 12 at the new studio with special guests Willie Nelson, Austin Mayor Lee Leffingwell and others. Nelson’s SiriusXM channel, Willie’s Roadhouse, channel 56, will broadcast with host Dallas Wayne live from the new studio weekdays from 12:00—6:00 pm ET and will broadcast live from the event.

“Austin is one of America’s most vibrant music cities, and we are excited to expand the SiriusXM footprint there with our new studio,” said Scott Greenstein, President and Chief Content Officer, SiriusXM. “The unpredictable but influential music scene of Austin, its artists and its style, will be represented by the amazing array of artists, and the shows and channels that will broadcast from there. Willie is an iconic and much-loved artist, who has been part of the SiriusXM family for years, and we are thrilled to have him help us open the studios.”

For more information on SiriusXM, please visit www.siriusxm.com.
Posted by Pushermania at 9:38 AM