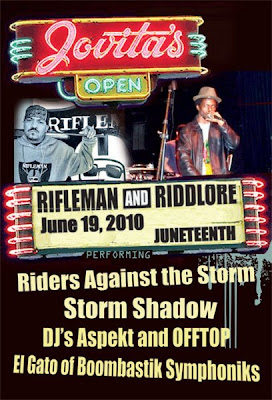 Innovation in rap music goes a long way. When the 90’s hit and emcees started chopping their rhymes, in a syncopated, accelerated pattern, an entire school of aficionados ran with the concept. Longtime teachers of the chopped style, Ellay Khule and Riddlore? persist to pitch lyrical sidewinders 20 years beyond first becoming widely known as regulars at LA’s famous Good Life Café.

There is longevity in carving new paths. Ellay Khule aka Rifleman continues to deliver earth-shattering tongue lashings in jettison, but an older, wiser Khule just might surprise you as well with some poppa large, laid back. Then there’s Riddlore? of Chillin Villain Empire, forever on his earthuristic bebop note and only getting better with time. From Project Blowed to Jovita’s, these two medaled veterans of the rap wars crush with a passion.

All ages event with a $5 cover and ladies free before 10pm..

Opening acts include Riders Against the Storm, Storm Shadow and DJ Aspekt.

Watch Riders Against the Storm – In the Light video here…

Posted by Pushermania at 1:10 PM