Cuz it jams, cuz it's a real record, and its on the thowededest label in Austin, (IN)Sect Records. 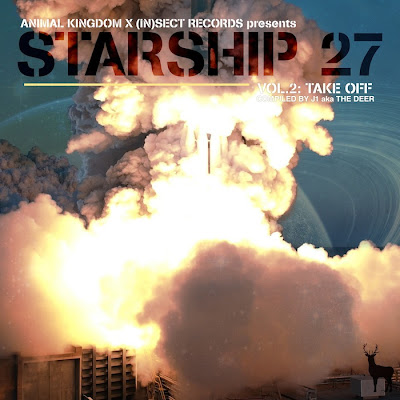 In 2009, an album emerged out of nowhere like a UFO sighting called Starship 27. The album, curated by DJ, drummer and producer, J-1 a.k.a. The Deer,

If this is your first time hearing about the Starship 27 phenomenon or you just haven't been able to find it, we've re-upped the original record and

it's available for free download HERE! This time around on Vol. 2, we see the same cast coming back as well as the list of tracks and producers expand to include

music by Flame Brown (Bling 47), Eric Lau, I-Ced, Coultrain, B. Bravo, The Kone and Teeko comes back with his amazing group F.A.M.E.

As well as also releasing a bonus 45 with unreleased FONK from Georgia Anne Muldrow and 'low budget kingpin', Kev Brown on the flip side.

With Starship 27 vol. 2, J1 becomes the curatorial captain guiding the spacecraft on its voyage.

For tracklist and a list of stores that have it, go to:

insectrecords.org/Starship27
Also, You can download a couple tracks from the record for free here:

And In case you missed the first installment from 2009, We've posted it up for free: