Austin, Houston and Dallas! My favorite TV Show of all time is coming live to the Paramount Theater right here in Austin. Click here for more dates in Texas/The U.S.! 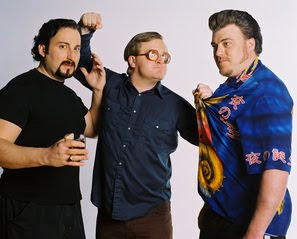 Ricky, Julian and Bubbles are back with a BRAND NEW live show - and this time they don't have parole officers with them and they're not on Community Service - they are DRUNK, HIGH and UNEMPLOYED! But not for long if Bubbles has his way!

Spend an evening with the Boys as Bubbles tries to create a new career for himself in the movie industry, Julian puts his latest money-making scams into action and Ricky has an idea that can 'change the world!"

Having answered to the law in the “Ricky, Julian and Bubbles Community Service Variety Show,” preaching the dangers of substance abuse to avoid jail time, the crew are now on the road without parole officers. Expanding their reach by leaving Sunnyvale behind, Bubbles tries to create a new career in the movie industry, Julian puts his latest money making scams into action and Ricky has an idea that can change the world.


***CO-PRODUCED WITH OUR FRIENDS AT SHERPA CONCERTS***
See You at the show,
--The Team at Square Peg Concerts

Yo straight up if you know me, you know I have pushed this show on you ruthlessly. I have no idea why this show is not on some U.S. network in rotation like mad, cuz it's a hit the world over. And as far as I know has only ever been on legit TV in Canada! Most people, including me, who have seen the movies and seven seasons worth of shows before this year either had to download them illegally from the internet, or order DVD's from ebay or whatever. Now it's on Netflix and I heard you can see episodes on Direct TV. Whatever, they have sold out pretty much all their U.S. shows, so some U.S. network missed out on a lot of money.

You can see episodes on YouTube, as well as outtakes, and all sorts of shit there. You need to get up on this. And watch it all IN ORDER! Start with the first film (yes its in black and white) and work your way through the seasons, and other films. The Christmas Special is a classic you will watch year after year.

Sounds weird to say, but these dudes start to feel like family after a while. I literally HAD to watch all seven seasons, in a row over the course of a couple of months. Like a great book, I couldn't put it down.

And I'ma see them in Austin, Houston and Dallas.

PRE-SALE Tickets are on sale NOW till midnight tonight, then general sale starts tomorrow at noon. Word is tickets are already moving steadily, so GET YOURS!

INFO FOR PRESALE TICKETS HERE! YOU ONLY HAVE A FEW HOURS NOW!

Check the Do512 Page

The OFFICIAL FACEBOOK PAGE!
Posted by Pushermania at 3:49 PM