Improvised music under the influence of the late DJ Screw 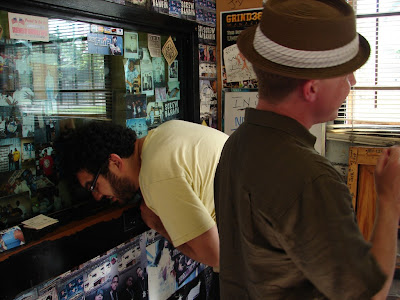 CLICK THIS LINK RIGHT HERE. To go to a website with all the information and background on both of these musicians. Basically in a nutshell, these are two major musicians from Houston, doing radical interpretations and interpolations of a style of music that was formed in their very city, in their own way. Jammin' Screw on a trombone and lap steel and shit, ain't even trippin'.

I just got the 2 CD Set in the mail today and am giving it my first listen, after hearing ABOUT It for a year. I've been wondering what the end result was going to be, and I have to say straight up, I like it. I like to see the music spread into all sorts of different situations. I'd love to know what you think. There's an MP3 on the page, that I linked above and here.

And here's some background taken from the site elcangrejito.org/concerts.

Originally commissioned by the gallery labotanica for the exhibit “Screwed Anthologies”, David Dove and Lucas Gorham bring their long history as collaborators to their exploration of an expansive (yet particular) musical sensibility.

With trombone, guitar, lap steel guitar, loops and effects, “Screwed Anthologies” (which became the name of the duo) improvises without preconceived structure.

Preset compositions/forms are not used, but the two access the thick and languid feel of DJ Screw’s mixes as a guide through their own sound world, sounding something like a record of improvised music slowed down, with a dose of low drones, some achingly-slow-to-a-crawl blues, and a sampling of DJ Screw tracks (selected from the hundreds of mixtapes released by DJ Screw in his lifetime).

DJ Screw was an artist who (in his short life) left a profound legacy that was both intensely regional and extremely influential beyond its region. His music was absolutely experimental, yet not self-consciously avant-garde. It had the urgency of improvisation in its raw construction and immediate creation (DJ Screw made somewhere between 600 and 1000 hundred-minute tapes in only 8 or 9 years).

“Screwed Anthologies” crafts music with a strong influence from their fellow Houstonian, DJ Screw. They make it in acknowledgment of aesthetic undercurrents that connect artists across the lines of genre. They make music influenced by an artist who was one of the most radical to ever emerge from their city.

Screwed Anthologies will release a double CD in time for their Summer tour.

Sunday, May 30 – Houston, Texas
with The Gray Tapes & BLACKIE
at The Husk (next to Kohn’s)
2808 Milam, Houston, TX
7:45pm
presented by Resonant Interval
http://resonantintervalhtx.wordpress.com

Tuesday, June 15 – Toronto, Ontario, Canada
with See Through Trio
at Somewhere There
340 Dufferin Street (one block south of Queen/north of KingCorner Building – entrance from Melbourne Avenue),
Toronto, ON
8pm
Presented by Somewhere There
http://www.somewherethere.org